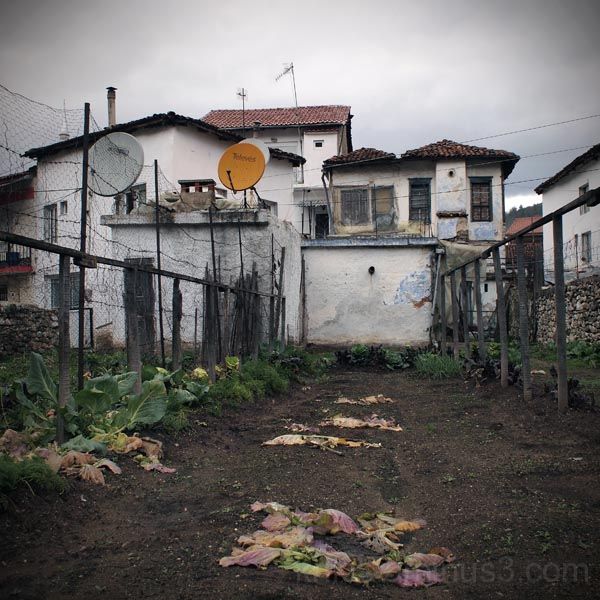 Previous Next
← previous day next day →

Posted by yiannis krikis (thessaloniki, Greece) on 8 February 2010 in Cityscape & Urban and Portfolio.

the leaves on the ground remind me of my grandmother's garden. but the satellite dishes bring this right up to date. love the soft colors.

The satellite dishes say a lot!

wow
what a paradox !!!
its a cool shot

A paradox of this is important but much everywhere, I'm afraid!
A magnificent setting that reveals life in a garden. Something to make ends meet. Remains of cabbage cut into one end of the plot. It seems a place to park a car. Humble buildings viewed from the rear. Something not normally seen from the main street? But they TVdigital and all the benefits of our "advanced culture"! You may well live well? Never come to know from here! Yiannis Greetings and thanks for another great story!

A garden in winter. A very beautiful atmosphere, simple and beautiful.

A strong contraposition between old and new.

Often behind the beautiful façade, the back is not seductive beautiful view and well taken.

lol those satelite dishes look out of place in the old world charm... neat shot!!

Chris B from Netherlands

Cabbages? Like the texture and color here. How are things in Greece this week? Tax-collectors and customs walked out on strike? Looks like the public sector is not taking the austerity measures Greece is being forced into well at all. I don't agree with them either. As someone said on the BBC this weekend: Greece is a company, there are real people with real big problems on to carry with such measures. Perhaps it's not the time to be concerned with big deficits.

I read that if Greece defaults on its loans it will be because of market pressure. It needs money from the market to finance its debt which yields more than that of Germany above 3 percentage points. French and German banks are suspected to be highly exposed to Greek debt, so Greece may see some sort of bailout with the same moral hazard of that encountered by the taxpayer in the U.S. who had to foot the bill.

Sorry to bore with economics, but the situation in your country is tense and has been for a while. Hope you folks pull this situation soon.

wonderful capture! I really like the contrast between the rundown buildings and the orange satellite :)

Interesting priorities. I see things like this sometimes and wonder at the reasoning.

Amazing photo, makes me wonder what their TV's look like. Excellent composition, interesting to see such new technology on these old structures.

Something that keeps everyone connected.

The antennas on the old houses is a striking contrast (I just watched Truffaut's "Fahrenheit 451' recently, and I am reminded of the opening title sequence). And the cabbages? What a crazy world.

Yes...good contrast and document on the inter-communicated society with all those objects of "communication" here. I like your composition here with this wall and path going to a ended-wall and by the way, a lot of security (it's imposible to go throu). Well done Yannis.